So. Last week at Guides, some of the girls at last made the new promise. You know, the one that's been in the news because it has been changed to remove the reference to God. The one that people, including that well known authority on women's issues and young people Victoria Coren, have been sneering at because it now asks us Guiding members to "be true to myself and develop my beliefs". The one that the General Synod of the Church of England are now wading in to "take action" against.

Coren takes issue with the wording that has been chosen, dubbing it a "lame, weak, hollow clump of Californian couch jargon". I realise that she is being tongue in cheek by lumping it in with modern slang terms that she scorns such as "vino" for wine and "a couple of jars" for beer (her disdain for which seems to have little basis other than contempt for normal people and the way they speak about their lives) - but I find her overall disparaging tone self-promoting, ignorant and frankly unpleasant. It seems like everyone's got an opinion about the new promise, but no-one bothers to ask anyone in Guiding what they think (eg some Guides). Unsurprisingly, rather than imposing an eminently sneerable change on the young people that form the body of the guiding organisation, the committee tasked with looking at the new wording decided to do just that - so they asked all 550,000 members what they thought, and the majority said they would prefer a promise that has more inclusive wording. They also overwhelmingly said that they wanted everyone to make the same promise - because this pledge is about something that we do together, as a community.

I notice that VC doesn't attempt to suggest a better wording that makes everyone welcome into the Guiding organisation. One that is simple enough to appeal to girls of all ages, but complex enough to replace the nebulous notion of religious belief. And why should she? She's not in the organisation, she doesn't have kids who are... Really what is her article other than another opportunity to look down her nose at people she knows nothing about?

None of the commentators on the promise seem to be from the Guiding world, so I kind of wonder what gives them the right to go about mocking an organisation that they don't bother to have anything to do with otherwise. Other coverage of recent events in the Guiding world seems to be dominated by haughty columnists who last had any contact with guiding when they were haughty kids, and is punctuated by old photographs of Guides looking geeky and outdated. Where is the journalism with integrity that looks to speak to those who are from the world they are commenting on? Why don't they try and make genuine contact with an organisation that is diverse, outspoken, modern and full of inspiring young people? It boils my piss, it really does.

I've spoken to real Guides about what the promise wording means to them. We spent a whole evening dedicated to finding out what they believed in, what making this new promise would mean for them, and encouraging them to think about it in an open-minded way. I mind-mapped their discussions - feel free to take a look at the photo VC, if you want a quick view from coal face. As you can see here, for my Guides the notion of "being true to myself" means to have integrity, to be free to live their lives in a way that isn't judged by others, and to be tolerant towards others trying to be true to themselves. I thought that was pretty mature and enlightened of them. 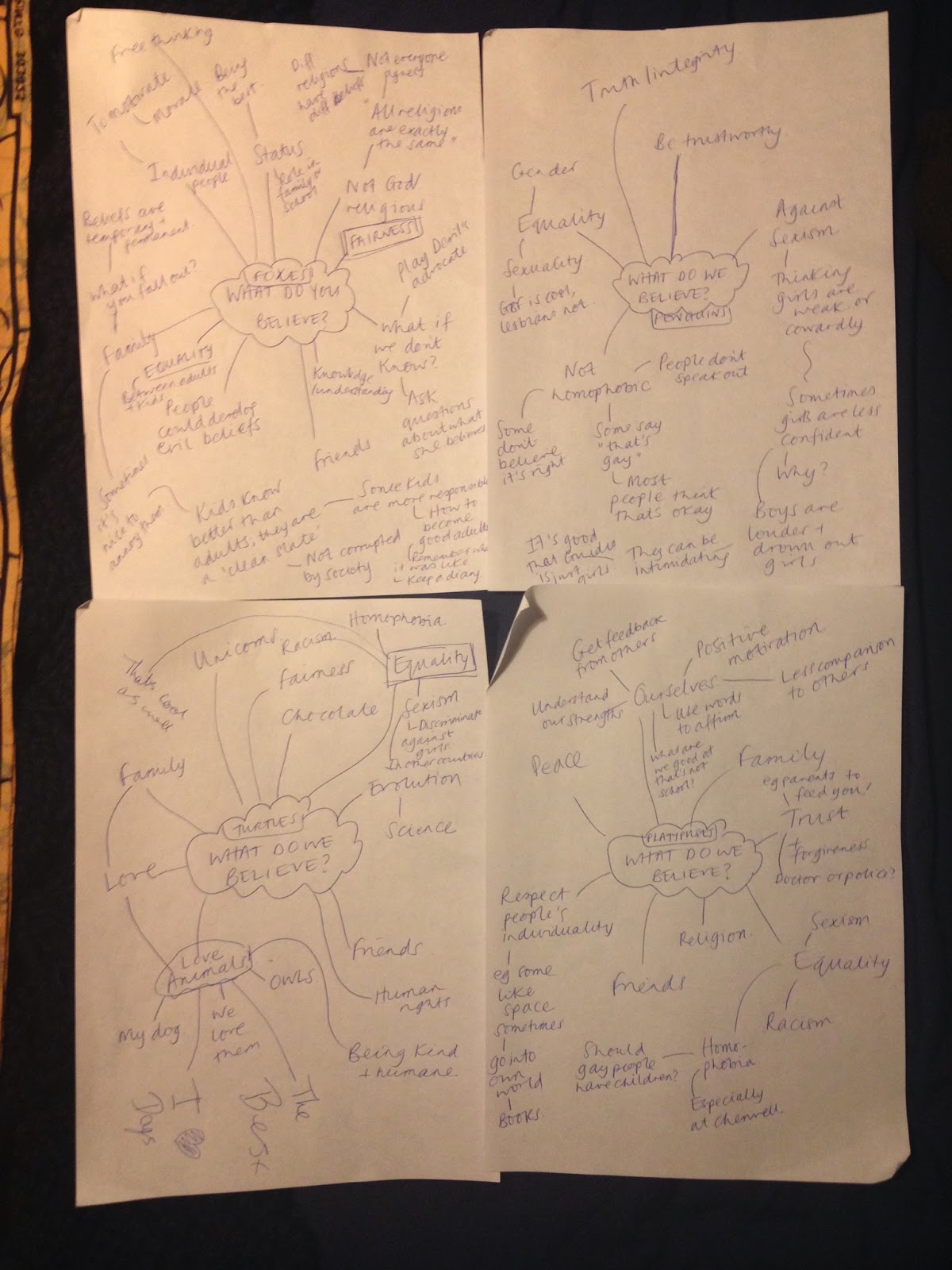 The girls unanimously thought that the edit to the promise to remove the overt reference to God was a positive thing. They talked very frankly about their beliefs - and even those who did believe in a god felt better making the same promise as all their friends, and knowing that nobody felt uncomfortable doing it. As someone who has crossed their fingers metaphorically every time I have made the promise throughout my 25-year involvement in Guiding, this made me feel elated, and relieved that I could finally make a pledge I believed in. Had the wording not changed in this respect, I would have started to reconsider my position as a guiding volunteer, and so would others I have spoken to. Those in the General Synod crying "discrimination" against those believers who now don't get to say in this forum that they love their god have missed the point - we all pledge to "develop our beliefs", whatever those beliefs are. When significant numbers of girls and leaders either find God an irrelevant abstraction or something they actively don't believe in, but have to promise to love it anyway, THAT is discrimination.

I also find the argument that "being true to yourself" could mean that a horrible person is encouraged to be more horrible is pessimistic, unrealistic and purely theoretical. As if we won't actually talk to the girls about what they think it means for them. And as if having a non-existent, intolerant and excluding paranormal body in the promise as something to pledge your allegiance to is any better. Saying that changing the wording of that one line now means the promise is entirely self-centred is just plain wrong - the rest of the promise gets us to say we will serve our community and help other people! It's lazy and mean-spirited and assumes the worst of people - but perhaps predictable from those who comment without insight, just to delight in empty scoffing.

"To thine own self be true" is what Polonius says to his son Laertes in Hamlet. Polonius' character might be a blustering whittler, but he's not a bad person and sincerely wants the best for his son. His character's use of the wording certainly gives the lie to Coren's dismissing of it as 20th century psychobabble. She deems this phrase "stubborn, self-important and faintly aggressive", which is a very interesting description... To me it seems to better describe the tone of her article than it does the quality of the girls I meet and talk to every week. Perhaps those who love to stridently advertise their own opinions might condescend to do the same.
Posted by Kate Parrinder at 11:43 pm